Brass Wind and Fire’s 10th Birthday Party gig was a great success, playing to an enthusiastic sell-out audience who demanded an encore.

“We really enjoyed last night. We came last year, and we’ll be back next year too!” – Mary

The band presented founder Neville Ford with a bottle of champagne and flutes in gratitude for his efforts over the years. Neville recently decided to step down from playing in the band, but he was at the gig anyway helping behind the bar.

“The greatest satisfaction is that the band now has a life of it’s own, after 10 years the band has a strong committee, a consistent make up and is financially sound. There are only a few of the orginal cast left, which is healthy and as it should be, and I hope the band continues to thrive for many years to come.” – Neville Ford 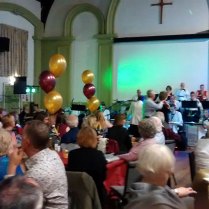 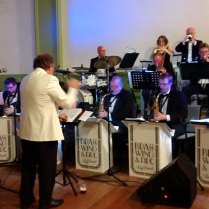 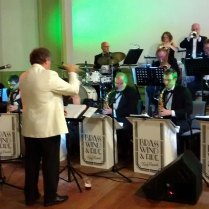